There are many reasons karate stylists should make friends with people who practice aikido. Here’s a good one: A major fault of the modern martial ways is the narrow-minded view of combat that’s fostered in many dojo.

For example, Joe Karateka believes his art is the final word in self-defense or character development. Therefore, even if the highest-ranked black-belt aikidoka from Tokyo were to put on a demonstration on Joe’s front lawn, Joe would rather be in the backyard whacking his makiwara. (Don’t be smug, all you aikidoka who are reading this. Practitioners of judo, kendo and other budo are the same way. You make disparaging remarks about other arts, and you don’t know anything about them.)

The reason I’m suggesting you befriend some aikido practitioners, however, isn’t to foster understanding between martial artists or anything quite so noble. It’s because aikido techniques can teach you some valuable lessons about how to manage pain. 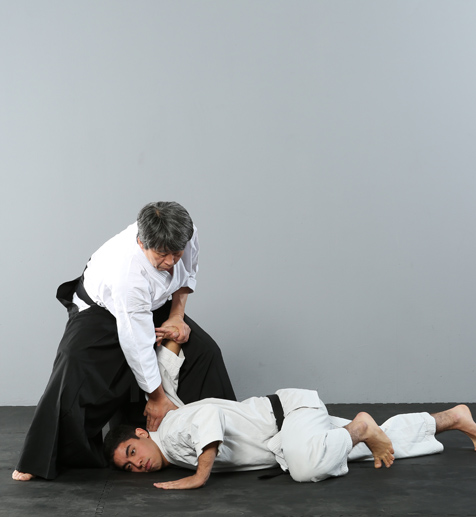 I know that some of you will tell me you could write a book on the subject. If your karate training is even halfway serious and you’ve been at it for a while, you already know a lot about pain. I hope you weren’t seriously injured in the process, but I expect you absorbed your share of bruises, sprains and a host of other physical misfortunes that often accompany karate practice.

Furthermore, I’ll bet nearly all those injuries came suddenly and unexpectedly. You stopped a reverse punch with your nose. You tried to throw a roundhouse kick at head level when your hip and groin muscles wanted to kick at stomach level. You went one-on-one with the makiwara and found that your fist and hips were stable as all get-out but your wrist was just a little weak.

The kinds of pain we encounter in karate tend to be like that. Karate — except for those few systems that concentrate on grappling — doesn’t feature the kind of pain you can inflict slowly and deliberately, in gradually increasing degrees. Aikido, on the other hand, specializes in it. You’ll also find similar techniques in the Chinese art of chin-na. (I’m using the example of aikido because that’s the martial art with which most karateka are most familiar, and they’ll probably feel more comfortable in an aikido dojo than in a training hall for a non-Japanese art.) 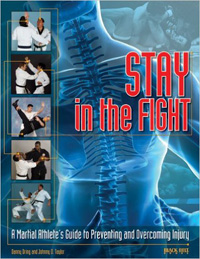 Order your copy of Stay in the Fight: A Martial Athlete’s Guide to Preventing and Overcoming Injury, by Danny Dring and Johnny D. Taylor. It’s on sale at Amazon now!

But wherever you choose to go, you should go. Show up before the classes begin or after they’re over, and bring a case of soda or some other gift. Explain to the instructor what you want to learn and ask him to teach you some basic pinning techniques that inflict pain as well as immobilize the opponent.

Nikkyo, the “second teaching,” is a good one; sankyo, the “third teaching,” is even better. These are sophisticated methods, so you won’t learn all their subtleties in a short time. What you want is to be able to execute them on a partner who’s going along with the movement. I’m not talking about making a wrist lock work in combat because even a skilled aikido exponent might not want to rely on pain-compliance techniques in a real fight. Rather, I’m talking about what they can teach you.

I have seen skilled karateka receive instruction in such techniques for the first time, and it’s a remarkable event. You can see them go from skeptics about the efficacy of the locks to real believers in the space of half a second — the length of time it takes to have their wrist captured and controlled.

What’s most interesting about this reaction is how uncontrolled it is. These same karateka might barely react to a punch that splits their lip. They’re accustomed to that kind of pain. However, in most cases, the pain of a wrist lock is entirely foreign to them, and they respond dramatically and without any sense of self-control. That’s precisely why they need to feel it. 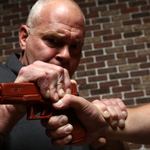 The joint locks of an art like aikido cause intense pain, but when done correctly, they don’t inflict any injury. Now, I’m not suggesting you go to an aikido dojo and ask to have your wrist broken. What I want you to do is have the lock applied, learn to do it yourself and then practice executing the technique. You’ll find that, with time and training, your reaction is much less immediate.

You’ll also begin to see that even when you know pain is coming, it’s something over which you have some control. You can learn to compartmentalize and accept it without letting the sensation absorbing your entire attention.

Believe me, the first time you have a good wrist lock applied, you’ll be thinking about nothing else but the pain. At this stage, it’s an almost complete control over your body. Consequently, it isn’t uncommon for someone who’s inexperienced with this kind of pain to collapse, lose control of his balance and posture, and land in a heap on the floor. It’s not unheard of for beginners to wet their pants when certain locks are applied — dramatic and embarrassing proof of just how much of our control we surrender to this sensation. 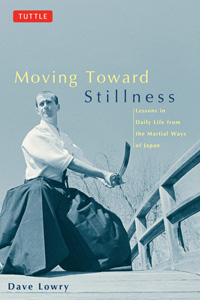 One of the many classics Dave Lowry has written is Moving Toward Stillness: Lessons in Daily Life From the Martial Ways of Japan. Order it today on Amazon.

Western forms of grappling, like wrestling, usually seek to control an opponent’s body by immobilizing it. When you’re pinned to the mat, you lose your leverage and the effective use of your limbs. You can no longer mount an offense. The bulk of judo’s newaza (grappling techniques) effect the same results.

Holds that emphasize pain, on the other hand, immobilize an opponent by distracting him so he can’t attack you further. You can learn to escape holds in wrestling by perfecting counter-techniques, improving your strength and flexibility, and so on. To compete effectively against pain, however, you must have a mentality that can deal with its effects without surrendering control of your whole body and your means of defense.

Learning aikido’s basic locks and holds is an excellent way to start developing this ability.

Dave Lowry is a freelance writer who has trained extensively in the Japanese and Okinawan arts. He started writing Karate Way for Black Belt in 1986.